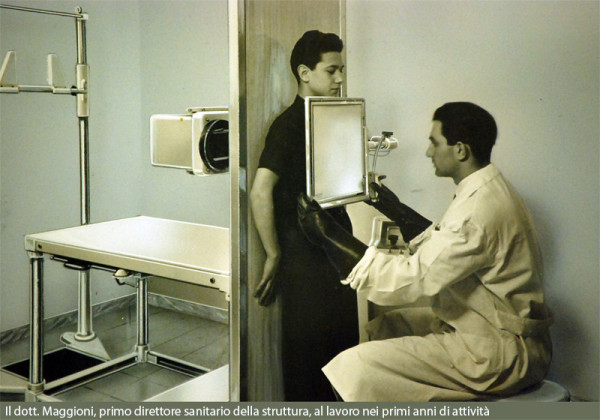 In mid 1950s, Oreste Maggioni opens a radiology center with his son Flavio under his villa on via Pellegrino Rossi. While Oreste designs and constructs radiological devices, Flavio, who in the meantime got his specialization in radiology, conducts examinations using devices realized by his father. The name on their plate reads as "The Radiological Center of Via Pellegrino Rossi", but the locals quickly begin to call it "The Little Villa."

These are the years in which the discipline of radiology is in its early days, and the imaging center of the Maggioni family represents the only alternative in the vicinity of Niguarda Hospital. Over the years, the Center undergoes serveral transformations including its name, which in 1980 becomes Ecoterm. In 2009, it moves to its current location on Via Giuseppe Finzi renewing all its infrastructure and quadupling its office space.

The number of medical structures in Affori has increased as years passed by. Yet, "The Little Villa" still constitutes a reference point for those who would like to have a more personal and humane relationship with physicians, technicians and the administrative staff.